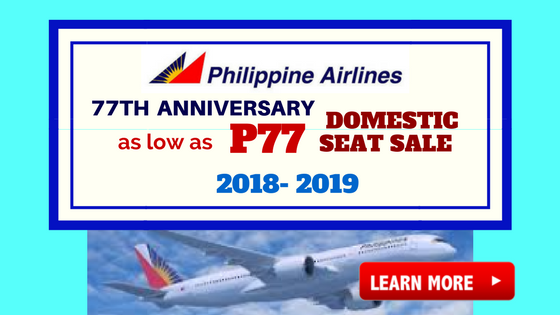 Fly to select Philippine local places for as low as P77 from Cebu, Davao or Clark. Travel from Manila to destinations in Luzon, Visayas or Mindanao for only P777 for one-way fare.

PAL 77th anniversary promo booking period is only from March 5-11, 2018. The seat sale has not yet began. Book or buy tickets fast as soon as booking begins on the 5th of March 2018. Sale tickets are limited and may not be available on all flights.

Quoted PAL promo tickets are valid for one-way trip and cover only the base fare. Government taxes, fees, ticketing service charge and terminal fees are not included.

Philippine Airlines sale tickets are non-refundable and non-rebookable. There is no child discount while infants under 2 years of age without a seat are charged 10% of adult ticket price.

Free 7 kilos hand carry baggage are included in the PAL domestic promo fares. Sale tickets to and from Manila cover checked baggage of 10 or 20 kilos. There is no free baggage allowance for flights from/to Cebu, Clark, Davao and other domestic destinations.

Aside from free baggage, Philippine Airlines offer free snack to its passengers on domestic flights.

How to Book the PAL Promo Fares

Although this seat sale is not Piso Fare, tickets are cheap especially on select routes where you will be paying only P77 as base fare.

Get your PAL promo fares and fly to your destination on board Philippine Airlines!

For more PAL seat sale and other airlines piso fare, promo fares and travel updates, Like us in Facebook: PISO FARE TICKET!