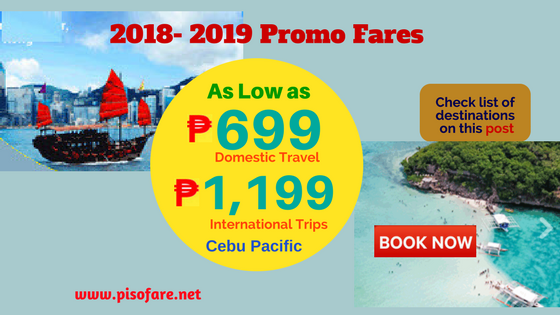 Have you got your travel plans for Christmas 2019 and the first quarter of 2019? If you have, avail sale tickets as low as P699 for select domestic trip!

Yes, as early as now you can book Cebu Pacific promo tickets for trips on November, December 2018 and extended to January, February to March 2019.

Lots of domestic and international routes are included in the seat sale. Fly to preferred Philippine destinations for as low as P699, P899, P1,099 and many more Cebu Pacific promos.

Realize your plans of having a vacation abroad by booking for international flights which start at P1,199. Enjoy Hong Kong, Guangzhou, Singapore for only P1,599 per way. Plenty spectacular foreign getaways in Asia are covered by the promo. Dubai, Sydney and Guam trips can also be booked via this promo.

Promo Sale Period: until April 10, 2018 or until seats on sale available

Manila to Bali, Brunei or Jakarta

Cebu Pacific Promos: How to Avail?

Don’t want to fall in long queue during boarding? Web self-check-in services are available to passengers up to 4 hours prior to scheduled flight.