Check Cebu Pacific promo tickets as low as P299 for travel dates May to October 2019! 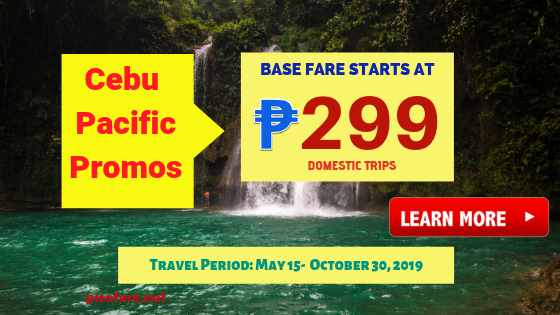 Do you have plans to travel to foreign countries? Lots of international places are included at the ongoing Cebu Pacific promo fare. Fly to Kota Kinabalu for as low as P632 base fare one- way trip.

Davao to Bacolod, Iloilo, or Zamboanga 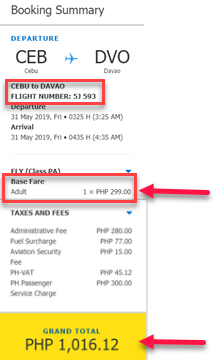 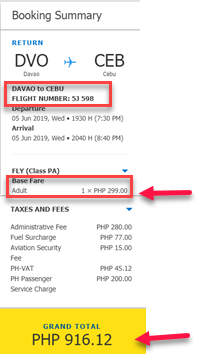 Clark to Bohol or Boracay (Caticlan)

Zamboanga to Cotabato or Tawi-Tawi

Manila to Guangzhou or Macau

Manila to Hong Kong, or Taipei

Cebu or Iloilo to Hong Kong

Manila to Nagoya or Tokyo (Narita)

Quoted ticket rates are base fare promos and do not include Web Admin Fee, Terminal Fee, Fuel Surcharge and taxes. Up to 7 kilos hand carry bag is also included in the ticket.

Checked baggage allowance is not included in Cebu Pacific promo fares. So, in case you will be bringing more than 1 bag or heavy baggage, it is best to pre-book your check baggage to save on baggage fees.

Cancellation or rerouting is not permitted on promo fares. Rebooking is allowed subject to rebooking fees and charges.

Cebu Pacific Promos: How to Avail?

The fastest way of booking Cebu Pacific is to book online at www.cebupacificair.com. Promo Code not required in booking.

Read How to Pay in Cash Promo Tickets Booked Online.

Want to receive updates on Cebu Pacific promos and other airlines seat sale 2019 to 2020? Like us in Facebook: PISO FARE TICKET to get promos and ticket sales updates!