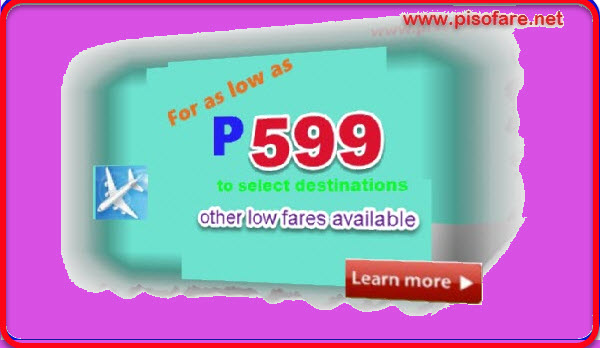 Check this new airline promo fares 2017 as low as P599 for domestic trips and P899 for travel to international destinations!

Grab promo fares as low as P599 for trips from Cagayan De Oro, Cebu, Clark, Davao or Zamboanga to select Philippine local destinations. Other promo fares like P1,099 and P1,299 for other local flights are also available.

Will you be traveling internationally? How about checking the foreign routes promo? As low as P899 Cebu Pacific sale tickets can be booked for Hong Kong and Taipei. Fly to Singapore, Macau, Brunei and Kota Kinabalu for only P1,599 per way.

Book the Cebu Pacific promo fares until June 13, 2017 or until sale tickets last. Seats on promo are Limited.

If you will be bringing heavy bags, or several baggage, it is advisable to buy in advance a Prepaid Baggage Allowance to save on checked baggage fees. Only 1 bag not beyond 7 kilos can be hand carried as cabin baggage.

Prepaid Baggage Allowance, and other Add-on of add-ons can be added during booking or up to 4 hours before flight.

How to Avail the Cebu Pacific Promo Fares

Now, if you are interested, book or buy the low fares fast before these are gone. Book now and fly from September to December 2017 to your desired destination!

Want to receive updates on incoming airline promos? LIKE us in Facebook: PISO FARE TICKET for more promo fares 2017 to 2018, PISO FARE and travel updates!!!