Do you still need affordable fares for August 2018 and the succeeding months? Read this new Air Asia promo fares 2018 to 2019! 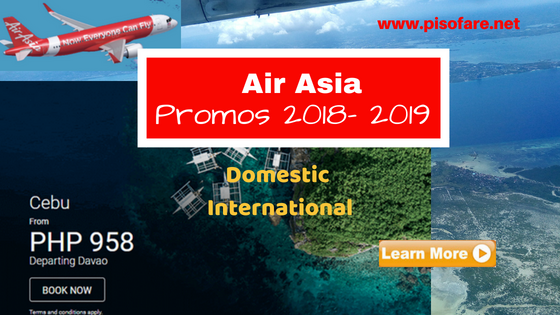 Booking of the promo is ongoing until August 5, 2018. Advance booking is required to avail the cheap tickets. Also, Air Asia promo tickets are not available during embargo period.

Although Air Asia sale tickets are not that low, these can be considered good buys as you can use the low fares in near travel dates.

As in all seat sale, Air Asia promo tickets are limited and on a First Come, First Serve basis.  Promo fares depend on seat availability and may not be available on all flights.

Air Asia promo fares can be used for one-way trips, but you can book for round trip ticket depending on sale ticket availability for your travel route.

To get the low fares, book the Air Asia promo ticket online at www.airasia.com or purchase them at Air Asia ticket offices located in airports.

Payment of Air Asia ticket booked online is not a problem even if you do not have a credit card. You may pay your ticket at Air Asia Payment Partners like: EC Pay, 7-Eleven, Cebuana Lhuillier, SM Store, M Lhuillier, Bayad Center, Robinson’s Store.