Are you looking for affordable fares for your trips? Check the Air Asia promo fares March to September 2018! 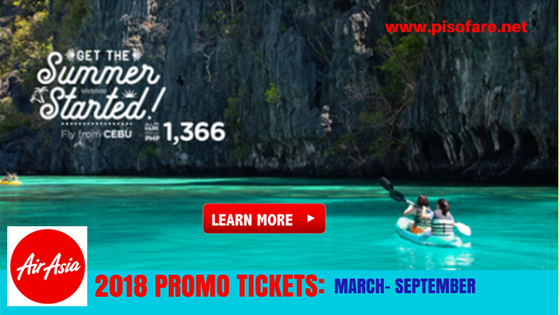 Ongoing is the Philippine Air Asia seat sale to Philippine destinations and international routes. Sale tickets can be booked until March 18, 2018 and are good for trips starting March 12 to September 2, 2018.

Featured on this sale are flights from Clark for as low as P966 to Iloilo; P1,066 to Puerto Princesa, Kalibo or Tacloban.

Air Asia international promo fares are also included in the sale. Fly Manila to Kota Kinabalu for as low as P1,490; Manila to Hong Kong cost as low as P2,590.

Air Asia promo fares are Limited and not available on all flights. Book the low fares now!

How to Get the Air Asia Promo Ticket?

The affordable fares of Air Asia are available by booking online at www.airasia.com. Promo code not needed in booking.

Sale tickets of Air Asia are valid for one-way trip and include the fare, VAT and 1 piece 7 kilos hand carry bag. Fares include airport taxes except for selected airports where airport tax must be paid during departure.

Checked baggage allowance is excluded in the promo ticket. To save on baggage fees, it is best to pre-book your checked baggage especially if you will be bringing heavy or several bags during your flight

Tickets are non-refundable and non-transferable. Changes in flights and dates are allowed subject to corresponding fees.