Do you need affordable fares for your trips? How about checking this Air Asia sale tickets for 2018? 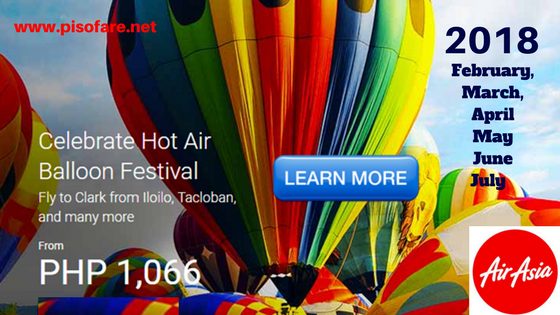 Get tickets as low as P1,366 Manila to Davao, Tacloban, Iloilo and Kalibo. Fly back to Manila from these places for as low as P1,381.

Air Asia promo fares are good for trips from February to July 2018. Thus, you can book your summer or early summer vacation thru this promo.

Sale tickets are available Clark to /from Iloilo, Kalibo, Puerto Princesa and Tacloban for as low as P1,066 one-way trip.

If in case your route or destination is not among Air Asia’s Philippine routes, watch out for Cebu Pacific or Philippine Airlines promos.

Book Air Asia sale tickets until February 18, 2018 and travel starting February (even a day after booking date) until July 31, 2018.

Shared below are Air Asia promo tickets to prove that this promo is legit.

Air Asia sale tickets are limited and are available only via online booking at Air Asia website: www.airasia.com or by calling the airline hotline at phone # (02) 722 2742 from 7AM-11PM.

Since the Air Asia promo fares do not include free checked baggage allowance, you can buy Prepaid Baggage Allowance during booking or up to 4 hours prior to flight departure.

Baggage weights of 30 kilos and 40 kilos should be distributed in 2 bags. A checked baggage must not exceed 25 kilos per bag/luggage.

Prepaid Baggage is cheaper than paying in the airport. Baggage rates are also lower when you buy it during initial booking than purchasing it after initial booking.